Applicants planning to work on a User Interface should make a list of three ways a current interface in the Evergreen client could be improved, why each suggestion is beneficial, and documentation to solidify your position.

Lack of system feedback loops for some user's actions in the Evergreen’s staff web user interface.

What are feedback loops?

The premise of a feedback loop is simple: Provide users with information about the result of their actions over the UI in real time. This information can be vital to the users because they can accommodate their future actions based on the feedback of actual actions, pushing them toward better behaviors.

Actually, feedback loops are not only a user experience design concept. They are a natural human process studied for decades and used in many fields. There are many natural feedback loops. They reveal to people whether they are making good or bad choices, and people learn from them. If someone eats something bad, they get sick. If they eat something good, it is delicious. If a person is nice to someone, and that someone responds in kind, the person feels good. If someone damages their body, it hurts. The brain has systems of reward and punishment that support basic survival.

Different actors who could produce feedback

A user performs an action over a UI, and that single action could produce different effects over different actors, just like:

Note: In this proposal I am only refering to system feedback loops (user->system->user).

The importance of system feedback loops

Feedback is an essential property of a usable product and necessary to avoid confused or frustrated users; it's critical for the user to naturally “flow” through the UI. For example, let’s say a user filled out a form in a web UI and hit submit. Nothing happens. The user hit it again. Nothing happens. The user proceeds to hit it multiple times and look around for some sort of message, but finds nothing. Maybe the page was just loading but there was no feedback to the user pointing that out, like a simple spinner. So now the user thinks that the application doesn’t work and gets frustrated. In this case a simple spinner could’ve corrected the user behavior by indicating him to wait for the page to load instead of keep hitting the submit button. The system feedback loop will guide a user pushing him toward better behaviors.

This concept is so important in design that great designers and organizations have taken it and converted it in a design principle:

How good system's feedback should be?

What about the Evergreen’s staff web UI?

Not all the Evergreen’s staff web UI has this problem, there are lots of user actions with its corresponding system feedback. Nevertheless, some critical cases remain uncovered:

This kind of high level interaction design problems can be avoided earlier by specifying a well defined UI style guide.

Across the Evergreen’s staff web UI there are issues coming from different sources depleting the user experience. What these issues have in common is that they are all visual.

Each single issue isolated degrades slightly the user experience. Together they have a much more significant effect and that is why I consider important to address these problems. In order to tackle all this I've organized the visual issues in three main categories:

By doing this I was able to analyze and attack each problem category individually. In the next sections I will explain and propose an improvement for each category.

Visual consistency refers to the consistent use of key visual design elements such as color, typography, UI elements as well as spatial layout. A Consistent UI has many benefits:

This concept is so important in design that great designers and organizations have taken it and converted it in a design principle:

The following sections are inconsistent with the rest of the UI:

The sections' inconsistencies are listed above: 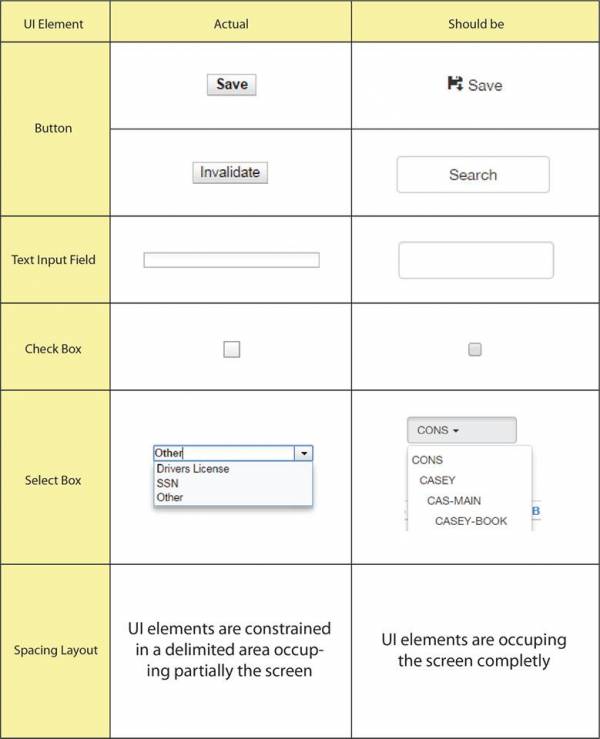 There is a variety of UI elements that can look similar but serve different purposes for the user. As a rule, people don’t like to puzzle over how to do things. If people who build a UI don’t care enough to make things obvious it can erode confidence in the UI and its publishers. This is one of the rules that Steve Krug mentioned in his “Don´t make me think!” book. It is simple: people should not think when standing in front of a UI. Therefore, with a quick visual scan the user must be able to clearly identify the different UI elements and associate them to a specific functionality. This is why two different elements that look similar and provide different functions can confuse users and produce a poor user experience.

In the Evergreen´s staff web user interface this can be found in:

Both the “search” and “clear form” buttons have an alignment and format very similar to the search’s field. In such way those buttons doesn’t stand out and can be confusing. Once you complete the form the user could feel invited to click the “Patron search” “button” in the right-top-corner, however, that’s not a button, it is just the title of the section where you are in. This is another confusion, it is look like a button but is not, is only part of the subsection menu. This happens because that specific section is separated from the rest in the submenu.

This is my proposal in order to solve this issue:

There are some text/background color combinations that the human eye find uncomfortable to read, e.g. text in red on a blue background or a text in any color on a colored-textured background, it always depends of how saturated each color is and the surface size. Therefore, knowing how to combine colors is essential for a UI in order to build a good user experience because it makes the texts easy to read. The Evergreen´s staff web UI presents readability problems caused by bad color combination in:

In the following graphic I summarize a proposal for solving this issue:

I focused on reducing color contrast between text and background in order to produce a comfortable perception and improve readability. Although this may be seen as a little improvement, this has a real positive effect on the user experience, because these readability issues are in critical places which are very used (they are both in menus) and contain important user data (like bills for example).

Where all these problems come from?

The problems I have analyzed have a common root cause, the UI style guide. It may be the absence of it, an incomplete guide or even lack of effort of the development team in order to follow the guide. The thing is that a much better solution for all this visual issues is to focus on the UI style guide and force its usage.

A team needs to have a guideline to follow. This should be one of the first steps in the conception of a project: define the aesthetic, the color, typography, language and investigate which are the patterns and common usage of UI elements. Visual treatment is frequently the area in which developers will have most freedom of movement. However, once the designers have chosen a visual language, it’s important that everybody stick to it. Visual treatment applies not only to the obvious elements like logos and navigation, but also to content elements, fonts and backgrounds.

The "Patron search" UI shows an unnecessary amount of features. Therefore this UI becomes very cluttered and complex which can produce confusion to the users and can make the application more difficult to learn, ending up in degradation of the user experience.

The "Patron search" UI is cluttered at the very beginning of any user flow, as you can see in the image below: 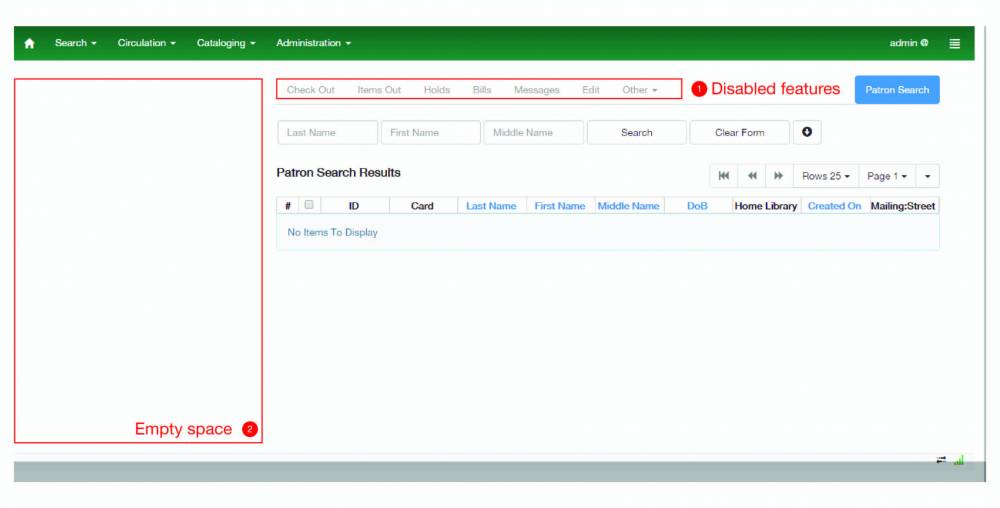 Regarding the points highlighted in the image, it is clear that there is unnecessary complexity added to the UI:

For UI problems of this kind, where it's wanted a very powerful interface, with many features, but it's also wanted to keep the interface as simple as possible, one of the best approaches is to apply the progressive disclosure design pattern.

Progressive disclosure is an interaction design technique often used in human computer interaction to help maintain the focus of a user's attention by reducing clutter, confusion, and cognitive workload. This improves usability by presenting only the minimum data required for the task at hand by sequencing information and actions across several steps in order to reduce feelings of being overwhelmed for the user. By disclosing information progressively, you reveal only the essentials and help the user manage the complexity of feature-rich applications. Progressive disclosure follows the typical notion of moving from "abstract to specific"; only it may mean sequencing interactions and not necessarily level of detail (information). In other words, progressive disclosure is not just about displaying abstract then specific information, but rather about 'ramping up' the user from simple to more complex actions.

In its most formal definition, progressive disclosure means "to move complex and less frequently used options out of the main user interface and into secondary screens".

There are several ways to apply the progresive disclousure pattern in a UI. Based on the actual "Patron search" UI I consider that the best approach is to use the dynamically-growing UI technique. By applying this approach the UI will progressive discover the features to the user by expanding itself. This approach has the following benefits:

Below I show an image with my proposed designs:

This image shows a general idea about how the progressive disclousure pattern could be applied in the “Patron Search” UI. I am not considering a full UI design with all the possible options or cases in it.

This kind of low level interaction design patterns applied to specific but central features are often specified in UI Style Guides. This highlights again the importance of having a well defined complete UI Style Guide for an organization.